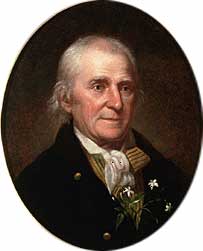 William Bartram (April 20, 1739 – July 22, 1823) was an American naturalist. The son of Ann (''née'' Mendenhall) and the naturalist John Bartram, William Bartram and his twin sister Elizabeth were born in Kingsessing, Philadelphia, Pennsylvania. As a boy, he accompanied his father on many of his travels to the Catskill Mountains, the New Jersey Pine Barrens, New England, and Florida. From his mid-teens, Bartram was noted for the quality of his botanic and ornithological drawings. He also had an increasing role in the maintenance of his father's botanic garden, and added many rare species to it.

In 1773, he embarked upon a four-year journey through eight southern colonies. Bartram made many drawings and took notes on the native flora and fauna, and the native American Indians. In 1774, he explored the St. Johns River, where he had memorable encounters with aggressive alligators, and also visited a principal Seminole village at Cuscowilla, where his arrival was celebrated with a great feast. He met Ahaya the Cowkeeper, chief of the Alachua band of the Seminole tribe. When Bartram explained to the Cowkeeper that he was interested in studying the local plants and animals, the chief was amused and began calling him ''Puc Puggy'' (the flower hunter). Bartram continued his explorations of the Alachua Savannah, or what is today Paynes Prairie. William Bartram wrote of his experiences exploring the Southeast in his book ''Travels through North & South Carolina, East & West Florida, the Cherokee Country, the Extensive Territories of the Muscogulges, or Creek Confederacy, and the Country of the Chactaws, Containing an Account of the Soil and Natural Productions of Those Regions, Together with Observations on the Manners of the Indians'', published in 1791 and which is today simply known as ''Bartram's Travels''. E. G. Squier and Edwin Hamilton Davis, in their book, ''Ancient Monuments of the Mississippi Valley'', name Bartram as "the first naturalist who penetrated the dense tropical forests of Florida." Provided by Wikipedia
1