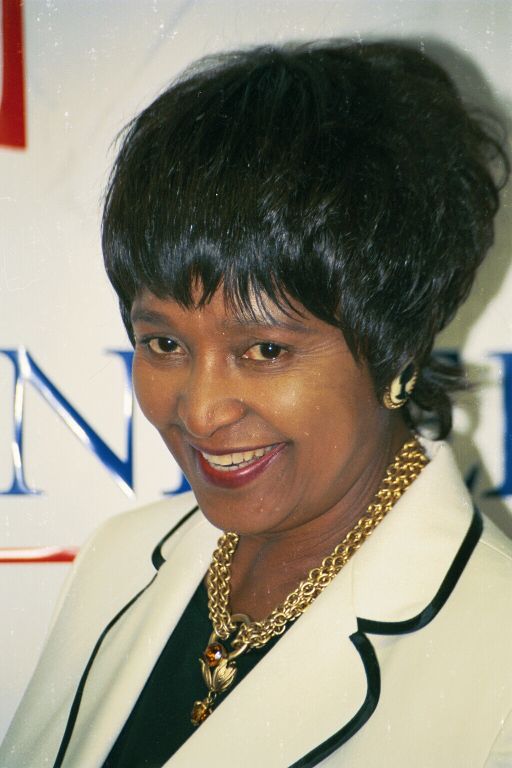 Winnie Madikizela-Mandela (born Nomzamo Winifred Zanyiwe Madikizela; 26 September 1936 – 2 April 2018), also known as Winnie Mandela, was a South African anti-apartheid activist and politician, and the second wife of Nelson Mandela. She served as a Member of Parliament from 1994 to 2003, and from 2009 until her death, and was a deputy minister of arts and culture from 1994 to 1996. A member of the African National Congress (ANC) political party, she served on the ANC's National Executive Committee and headed its Women's League. Madikizela-Mandela was known to her supporters as the "Mother of the Nation".

Born to a Mpondo family in Bizana, and a qualified social worker, she married anti-apartheid activist Nelson Mandela in Johannesburg in 1958; they remained married for 38 years and had two children together. In 1963, after Mandela was imprisoned following the Rivonia Trial; she became his public face during the 27 years he spent in jail. During that period, she rose to prominence within the domestic anti-apartheid movement. She was detained by apartheid state security services on various occasions, tortured, subjected to banning orders, banished to a rural town, and spent several months in solitary confinement.

In the mid-1980s Madikizela-Mandela exerted a "reign of terror", and was "at the centre of an orgy of violence" in Soweto, which led to condemnation by the anti-apartheid movement in South Africa, and a rebuke by the ANC in exile. During this period, her home was burned down by residents of Soweto. The Truth and Reconciliation Commission (TRC) established by Nelson Mandela's government to investigate human rights abuses found Madikizela-Mandela to have been "politically and morally accountable for the gross violations of human rights committed by the "Mandela United Football Club", her security detail. Madikizela-Mandela endorsed the necklacing of alleged police informers and apartheid government collaborators, and her security detail carried out kidnapping, torture, and murder, most notoriously the killing of 14-year-old Stompie Sepei whose kidnapping she was convicted of.

Nelson Mandela was released from prison on 11 February 1990, and the couple separated in 1992; their divorce was finalised in March 1996. She visited him during his final illness. As a senior ANC figure, she took part in the post-apartheid ANC government, although she was dismissed from her post amid allegations of corruption. In 2003, she was convicted of theft and fraud. She temporarily withdrew from active politics before returning several years later. Provided by Wikipedia
1